A Pool is the Ultimate Family Holiday Gift. 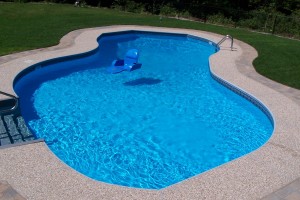 Around the holidays, people are thinking about their families. What could be more important than family health? Swimming is great, healthy exercise for the family and pools provide thousands of hours of healthy family fun and entertainment. A pool is the gift that keeps on giving. Unlike other gifts that are quickly forgotten, used up or thrown away, a pool will provide years of inexpensive family fun and entertainment. in the spring summer and fall when the other holiday gifts are all but used up or in the closet, your pool will be ready to go.

Next year the pool will still be there. five or ten years later the Lexus or the R V is old and used up, but the pool is still ready to go.

A pool is the gift that increases a home’s value and desirability.

So why not give your family the ultimate gift that will keep on giving year after year.

A four year research study conducted at Griffith University from 2009-2013, reported that “children who participate in early swimming are achieving a range of milestones earlier than normal populations “(Jorgensen 2013. In the first international swimming research project of its kind, the final report collected data from 45 swim schools in Australia, New Zealand and the United States.

In the final report for the survey research of developmental milestones, the parents reported the early swimming participants were on the average, “over 7 months ahead in motor achievement and around 10 months ahead cognitively and linguistically. (Jorgensen 2013)” The children who swam were on average “15 months ahead of the Australia Department of Education, Employment and Workplace Relations milestones in the socio-emotional category” (DEEWR 2012).

In summary of the child assessment studies for children actively involved in learn-to-swim classes, there was a “positive increase of 1.9 – 5.0 months across age groups in the area of Locomotion” (Jorgensen 2013). There were significant improvements in “Grasping Physical Skills from 4.4 – 5.6 months” (Jorgensen 2013) made by swimming children in all age groups. The oldest group of 60.2 months of age, revealed statistically significant gains of 5.2 months in Visual Motor Integration, whereas across all age groups the improvements were 2.9 months (Jorgensen 2013). Finally, in the area of Object Manipulation (kicking, throwing, catching balls), “swimming children performed significantly below the general population from 1.1 – 3.6 months below their same-aged peers” (Jorgensen 2013).

Cognitive and linguistic assessment tests revealed a number of areas that were significantly higher in swimming children as compared to the normal population in the same age groups. In “oral language” assessments which included the ability to recall short stories, to listen and to follow directions, there was a positive increase of 10.2 months in the early swimmers. The “oral expression” tests, an ability to name objects from illustrations and recall more complex short stories, there was an improvement of 11 months over the general population in the same age groups. “Brief achievement” measurements including letter and word identification skills, prewriting skills and simple mathematical calculations revealed statistically significant improvement of 2.9 months in early swimmers. “Brief reading” skills tests entailing letter-word recognition, pre-reading passage comprehension skills or the ability to match symbols with pictures discovered a 2.25 advancement in swim participants over the normal population. Finally, mathematic reasoning assessments comprising simple math calculations, counting, identifying numbers, shapes and sequences showed significant gains of 6.6 months made by children in all three swimmer groups (Jorgensen 2013).

The Griffith report demonstrates that young swimmers are performing better than the normal populations in motor achievement, language acquisition and cognitive development. It was discovered that children in learn to swim programs were not performing as well as the average population in object manipulation. However, many of the skills that the aquatic participants were exhibiting earlier than the average population are areas that are highly valued in the academic arena.

Jorgensen, R. Under-5s Swimming as a Site for Capital Building: supporting and Enhancing the Transitions. Australian Journal of Early Childhood. 2012

This entry was posted on Friday, January 31st, 2014 at 4:56 pm and is filed under Information. You can follow any responses to this entry through the RSS 2.0 feed. You can leave a response, or trackback from your own site.